Combat is a common occurrence in Sunless Sea. Warning: May cause death or general discomfort. 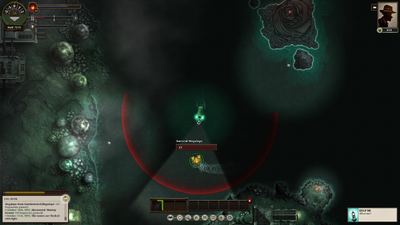 The combat system is fully real time. Captains maneuver their ships directly, trying to keep the enemy within the firing arcs of their guns.

Click on a ship or monster to target it, even if it is out of range. Only one enemy can be targeted at a time. If an enemy sees you and starts pursuing you while you are not already in combat, you will automatically target them and enter combat.

Each weapon has a specific firing angle and range. When in combat, a large red-shaded area around your ship represents each of your weapons' firing arcs. When multiple weapons are equipped, these will likely overlap.

Firing weapons in the dark of the Unterzee can be a problem. Your weapons require time to "warm up," until they reach "firing solutions," in order to accurately hit an enemy.

While the targeted enemy is within a weapon's firing arc, that weapon warms up - being loaded, aimed, etc - progressing towards a firing solution. If the enemy is in two weapons' overlapping firing arcs, both weapons warm up independently.

A weapon can be fired when the target is in its firing arc and the weapon has warmed up at least halfway. However, without a firing solution, the weapon may miss.

Each weapon has a base warm-up time (usually four seconds), but this can be sped or slowed by a few fixed factors:

The warm-up process can only be stopped or set back in a few specific ways:

Of course, the same works in reverse. If the enemy has you in range, they will be calculating a firing solution as well (unless they're zee beasts, which will try to close distance and absolutely ruin your day). Fighting against other ships resembles therefore a 2D dogfight. Ideally, you'll be able to tail your prey while dodging its firing arc. If you end up being tailed, turning around or fleeing at full power may be your only hopes for survival, unless you happen to have rear-facing guns. With zee beasts, the best approach is often to hit reverse, keep it illuminated while backing up, and pelting away with your deck gun.

Your statistics make you more powerful in combat. Your Iron stat adds bonus damage to your attacks; your Mirrors stat shortens your weapons' warm-up times; your Veils stat makes it harder for enemies to find you.

Your Officers enhance all these, so equipping the right Officers will affect your combat performance.

During your journeys on the Unterzee, you may find special items that can be used in combat, consuming the item for a useful advantage. These include:

After using a combat item, there is a short cooldown period before you can use another of the same type.

In early development, the game had a completely different combat system, where slow battles were fought in a separate minigame, rather than in real time on the zee.

Based on player feedback, the developers chose to completely overhaul combat. The earliest versions of the current system were introduced in the Steel update in October 2014.

For more information, see the article on the previous combat system.