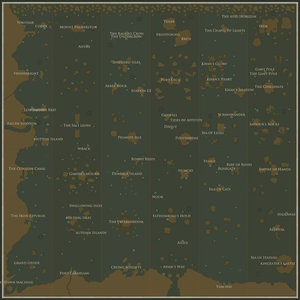 Complete map, including ports and labels added in Zubmariner DLC. While the tiles will change location (see below, under Map Generation), this may help a new player identify partially revealed locations.

The map or chart of the Unterzee is your primary method of navigating the treacherous, dark waters. Unless a Correspondent legacy is passed on, the Unterzee will be rearranged for each new captain.

The map is divided into 36 "tiles," most of which can be rearranged. Crossing from one tile to another will be recorded in the Ship's Log, mentioning the name of the new tile, if any, and a short blurb about it.

Here is one possible layout of the map tiles, represented with a table. While this arrangement is only one possible tile arrangement, the list of ports for each tile, not including light-ships, is accurate.

Each tile has a unique entry into the Ship's Log when you sail into it. This is a comprehensive list of each tile's name, ports, and the Log entry given upon entering.

Behind the scenes[edit | edit source]

The placement of map tiles is not completely randomized. The tiles making up the western and southern coastlines are always in the same position, as is the tile in the northeast corner.

Even then, the tiles that can be rearranged can't be just anywhere. The map is broken up into regions, with various tiles restricted to each region. For example, the northern edge of the map - not including the corners - will always be made up of Void's Approach, Palmerston's Reach, Stormbones, and Frostfound, but they can be in any order. This map shows the different regions; within each one (other than the western and southern edges) tiles will be randomly placed.

In addition, many tiles have more than one configuration, allowing for variations in island position, light buoys, and spawn layouts. Different tile layouts will always preserve the same ports and landmarks. The only exceptions are the two nameless tiles, which can vary dramatically.

Although the map layout does not seem to change dramatically, there are 6 billion possible arrangements of the map tiles, not including variations of each tile. If all 36 tiles could be rearranged anywhere on the map, there would be 372 duodecillion possible map layouts. 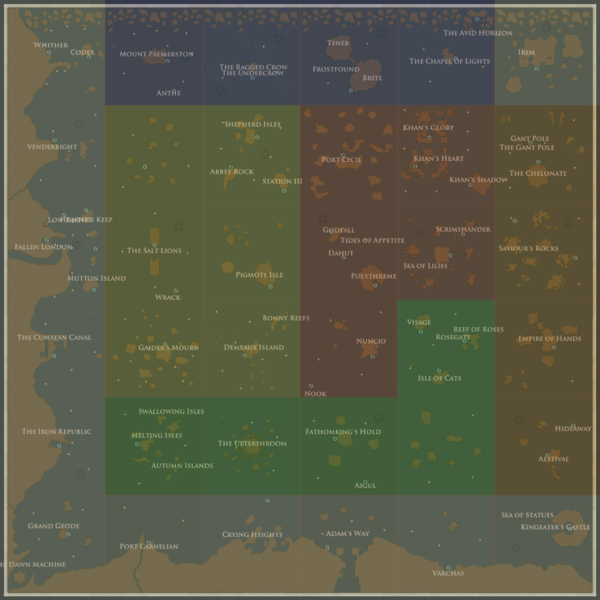 The uncolored areas are all fixed points in the Unterzee. They will always be there. Each colored zone's tiles will only swap with each other.

It is possible to remove the mask temporarily by using a third party program called TexMod. To do so:

How does this work? TexMod allows you to browse textures loaded into memory and will dynamically replace the texture viewed with a solid green one. The shroud is applied to the map as a mask layer and when it is selected, the solid black texture is replaced with a translucent green one. This allows you to view the entire map. In order to identify locations, compare them with the location shapes in our articles.

A map of all locations in Sunless Sea. Some locations are actually not fully implemented, although they show up on the map. There is also an HD-Version [1] available.

A table version of the original, early-development map layout. Several regions have been moved since this original layout was conceived, and some tiles on this map are in locations where they will never appear in current versions of the game. The Deconstruction and The Sea of Wings have also been replaced by generic nameless and portless tiles. However, the list of ports for each tile, not including light-ships, is accurate. 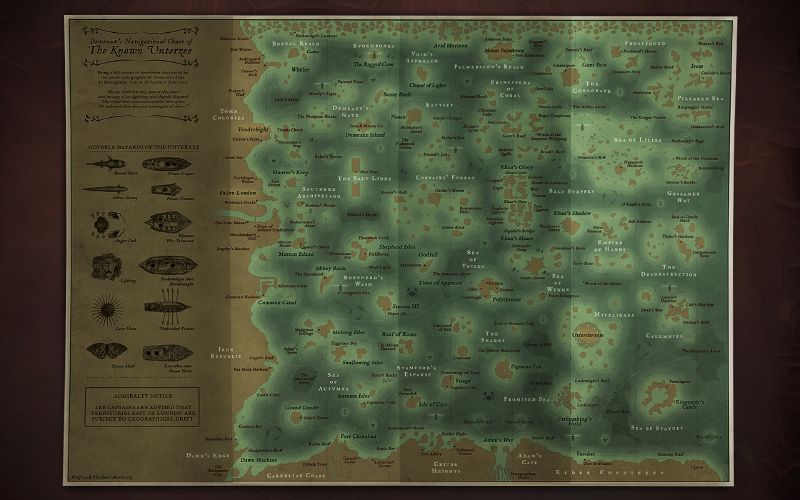