"Something forgotten is here"

The Eye is a colossal eye on the sea floor that appears on a nameless tile in the southern part of the sea. It appeared in some Sunless Sea publicity material, as well as in one of the splash screens when loading a saved game.

Each time a new Map is created, one of five nameless tiles could appear in the purple tile zone (the latitude of the Iron Republic, marked in green at Map#Map_Generation). The one which contains The Eye only contains one small rock. When you sail into it, the log message "Something forgotten is here" appears. The Eye does not appear on your chart even after discovery. 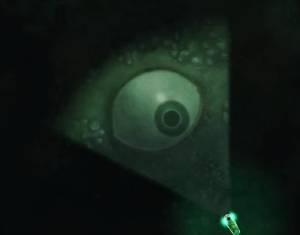 The eye as seen in both the trailer and in the game.

When you sail over it, it suddenly opens and the eyeball tracks your ship. Your Terror starts increasing +1 per second, and if you stay there for a few moments, the zee shakes and rumbles.

The Eye does not appear in every map: there is a 4/5 possibility that the empty tile in that area contains some non-descript islets instead. The following log descriptions all indicate that you've found the right area, but your map is unlucky:

The eye! The eye! As vast and round and wild as the moon!

Your crew shriek and cavort! They pull their moustaches and bay like dogs! You, of course, are calm. Utterly calm. Calm as the moon! Those noises must be coming from someone else.

This event is triggered when you zail into the Eye with your zubmarine if you have the following:

An Additional Eye on an Unobtrusive Part of your Person = 0

You are in a room, of sorts. It is bulbous in shape, not unlike a kidney. The furnishings (if that is what they are) look like the work of a surrealist. This straight-backed, many-legged edifice is perhaps a chair. That oily surface - a table? An altar?

The breeze, winter-cold, enters through an arched window. Through it, you can see a dark sky.

The sun is black. It squirms.