From Sunless Sea Wiki
(Redirected from The Webbed Port)
Jump to: navigation, search

Spiders? Lots of spiders! Saviour's Rocks is their lair located in the Gossamer Way.

"The sound of their constant motion is like pebbles on a beach..."

The story of the terrifying Sorrow Spiders starts here, with

Preparing for the Festival of Silk, and ends in one of two ways - becoming a Stooge of Spiders, or a Scourge of Spiders. Both options are pretty awesome, and also pretty high level. It's worth having two Captains explore both paths. The progress and ultimate outcome is mapped through the Quality

Saviour's Rocks: Caught in the webs of Saviour's Rocks, although there are a lot of Qualities involved in this Story, and it can get a little confusing. We've tried to explain them when they come up, but please note on the talk pages if there's something unclear.

Whichever outcome you're aiming for, they both start the same way:

Preparing for the Festival of Silk - details are in the notes alongside each action. Once prepared, it's

Into the Spider's Web, where you'll learn some background about the Sorrow Spiders. Then, to

The Web of Stone, where the decision is made.

This will ultimately take a lot of very high

Hearts checks, and generate a lot of

Terror, so make sure you have some way to manage it (if

Kingeater's Castle is nearby, you can manage it there). At

The Web of Stone, pick any action except

Burn the Tree of Seasons. You'll need a very high

Veils score if you want to do some extreme Spider Spying, but there's no penalty if you don't manage it. Then it's off to

A council of sorrow, which will lead you to

The Wreck of the Nocturne and

The Secret of the Nocturne. After which, return here to Report back to the Web of Stone and attend A council of joy. Grab the Captain of the Nocturne here if you can. It will make the next mission significantly easier. Then back to the Nocturne to set sail on The Final Voyage of the Nocturne, which, when complete, will finally start The Festival of Silk. At that point, simply speak to Emissary at any point to receive a

Searing Enigma and your Stoogehood.

Slightly shorter in length, this. When at

The Web of Stone, select the action 'Behold the Tree of Seasons', and then (attempt) to burn it down it's a very hard

Iron challenge. Note that this will add

Menaces: Wounds (1 on success, 2 on failure) so ensure you're healthy and that it won't immediately kill you. A dead scourge is no scourge at all. Whether or not you're successful, return to Saviour's Rocks to find that there is no Festival of Silk for which to prepare. You can explore a little (see

Silence of the Nativity but until you have

Something Awaits You, there's no progress to be made.

Return once Something *does* Await You, and you'll find

Everything remains deathly quiet, but you persevere, and you'll gain your the title of Scourge of the Spiders and discover

Depending on the story progress, the default port will be one of

These are all the interactions that can be picked directly from cards in the port, although not all of them will always be available. See each heading for more details on how and when they appear. 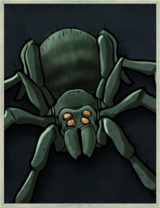 Intricate webs stretch into a darkness where the shadows are never entirely still. Gossamer threads stolen by the breeze tickle the goosebumps on your skin. A thousand unseen eyes promise a million more.

Preparing for the Festival of Silk[edit | edit source] 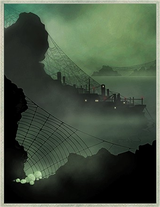 Preparing for the Festival of Silk

This path is available when Saviour's Rocks: The Festival of Silk = 0 (e.g. the Festival has not yet started in any way, nor been cancelled - essentially, from the first time you visit). It's where you pick up Port Reports, and other basic interactions, as well as start off the main story. If you complete the Stooge plotline, this will be replaced by The Port of the Nativity. If you complete the Scourge plotline, it'll be replaced by The Webbed Port.

The glumness of the Nativity is broken by the reds and golds of freshly hung banners. Spider-worshipping Weavers and Widows guide the traders in readying their celebration of gratitude to the 'generous neighbours' that silently watch over them from the shadows.

The Port of the Nativity[edit | edit source]

The Port of the Nativity

This is the default port, available after you 'earn'

Preparing for the Festival of Silk.

With the Festival of Silk over, the Nativity returns to its usual grey gloom. The people work under the silent but omnipresent supervision of their 'generous neighbours', dreaming of the day a year hence when colour will again be permitted in their lives.

Report back to the Web of Stone[edit | edit source]

Hospitality or not, you sense it would be a very bad idea to return empty-handed. A Weaver stands ready to receive the good news.

The Festival of Silk[edit | edit source] 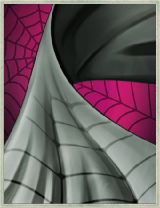 The Festival of Silk

This set of options will appear when Saviour's Rocks: The Festival of Silk = 1 (The Festival of Silk has begun), which happens when you've completed The Final Voyage of the Nocturne. See the Overview section for more info. You get to do 7 things here, and remember, you don't have to do them all at once! Saving the terror reduction for when you need it might not be a bad idea.

Once a year, the Nativity explodes with forbidden music and colour. Silks the envy of any in the Neath stream from every ship in a rainbow of red, green and gold.

Silence of the Nativity[edit | edit source] 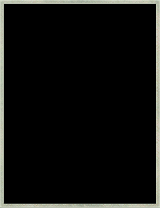 Silence of the Nativity

This will appear if you burned down the Tree of Seasons in The Web of Stone section (Caught in the webs of Saviour's Rocks = 98) and Something Awaits You = 0.

The Nativity has been dark since you awoke. Those of the crew that witnessed the sorrow-spiders' rage will not speak of it. Pressed, they only repeat, "Not now. Please."

The Web of Stone section (

Saviour's Rocks: The Festival of Silk = 5 [The festival is cancelled] and

Something Awaits You > 0. Basically,

Burn the Tree of Seasons, wait around for

Something Awaits You, dock, it'll be here.

Not a sound can be heard from the port. Not a single light flickers beyond the docks. 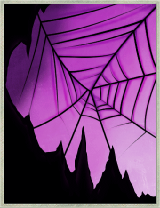 This is available when

The Web of Stone and then 'Investigate the Nativity', in 23px Everything remains deathly quiet above, and replaces the

Preparing for the Festival of Silk as the default port interaction.

Blackness, webs, spiders, slaves. What remains of the Nativity remains for the sorrow-spiders' convenience and at their diminishing pleasure. Soon it will be absorbed. Lost. Forgotten. A brave survivor promises to sell you Fuel and Supplies if you swear to leave. He will not sail with you. He will wait for any other ship.